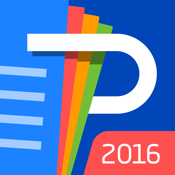 Polaris Office by Infraware Co.,Ltd is an app that allows you to view and edit Microsoft Office documents on your iOS device. It’s marked down to $3.99 for a limited time, so download it now for some significant savings.

Types of files you can view and edit include .hwp, .pdf, and text files. You can open email attachments and the app supports file manager and cloud services like Dropbox, Box.net, and Google Drive, as well.

Polaris Office is fast, works well with MS Office documents, and is easy to use.

Input languages are those supported by the user’s iOS.

Polaris Office was updated to Version 4.1.2 on February 1, 2013. The update fixed some errors with the fonts, added support for iPhone 5, made a number of fixes, and improved stability. The current version has 82 customer ratings with an average of 4.5 out of five stars. Feedback comments are generally good, with some complaints about saving problems, which may have been fixed in this update.

I use Microsoft Office all the time for my writing and editing and it’s nice to have an app that lets me edit text documents while on the go.

For: iPhone, iPod touch, iPad with iOS 5.1 or later. Polaris Office is optimized for iPhone 5.