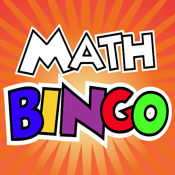 Math Bingo by ABCya.com is a fun educational app that will help kids gain an understanding of basic math.

The aim of the game is to answer math questions correctly in order to accrue five Bingo Bugs in a row. If a question is answered incorrectly, the correct answer will be provided so children can continue to learn as they play.

Math Bingo features a variety of game modes, such as Addition, Subtraction, Division, and Mixed. The difficulty level can also be adjusted depending on the player’s ability, and you can add up to 30 different player profiles. This app is ideal for a classroom full of eager-to-learn kids.

Math Bingo was updated to version 1.5 in mid-March of 2012. The current version has a total of 852 customer ratings with an average rating of 4.5 out of 5 stars. Customer reviews are generally very positive.

Although I think Math Bingo is a great concept and an effective way of teaching children the fundamentals of math, I can’t help but feel that the game play is somewhat limited. Most children will master the basics of the game very quickly, and will steam through the difficulty levels. Because of this, this app would quickly become redundant, causing kids to lose interest. Having said that, it is certainly a better choice than some games so I would recommend trying it out and forming your own opinion.