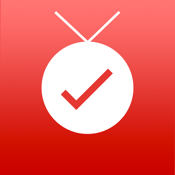 TV Show Tracker by Pixel-Perfect Widgets lets you keep up on all your favorite shows and episodes.

With the sheer number of television series and the different seasons and episodes that are on the air these days it can be difficult to track which ones you`ve seen and which you haven't. TV Show Tracker lets you organize all of the shows you watch and track each episode.

TV Show Tracker lets you browse all episodes for just about any series ever announced. You can view a quick overview of any episodes coming and keep a detail of the episodes you have already seen. The app will also display as an icon badge the number of episodes you haven't seen for the series you are tracking.

Information on each series and episode is also provided, including a synopsis, screen capture, and video

preview. TV Show Tracker will also inform you on the times of upcoming episodes to ensure you don't miss one. A quick shake of your device will also show you other TV series that may interest you based on the ones you currently watch.

TV Show Tracker was last updated to Version 2.3.1 on February 21, 2013 and included simplified Chinese localization and improved support for newer devices. There have been 159 ratings for this app with an average score of 3.5 out of five stars.

This app has a lot of great features for the typical TV fanatic. I like the detailed information and previews that area available for most episodes and the icon badge is a cool function.

For: iPhone, iPod touch, and iPad with iOS 5.0 or later