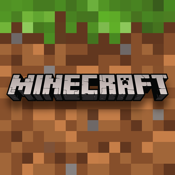 Minecraft – Pocket Edition by Mojang is a pocket edition of your favorite game.

Minecraft is fantastic game of hoarding resources and building things to make your life in the game better.

Create structures, ponds, farms, and anything else your imagination can come up with. To be successful at Minecraft you only have to think about what you want to do, figure out how to do it, and then do it. There are few limitations.

Minecraft – Pocket Edition brings the vast majority of the greatness of Minecraft to your iPhone, iPod, or iPad. Play in randomly generated worlds or over WiFi with friends. There is also a creative and a survival mode that you can play at any time.

Another neat feature in this app is the ability to starve to death; yes, this is a neat feature. You now need to cook yourself meals and stay fed or you die. On top of that you can create swords, bows, dynamite, and hunt down skeletons, spiders, and other beasts.

Minecraft – Pocket Edition was last updated to Version 0.6.1 on February 2, 2013 and included signs, armor, and some minor bug fixes. There have been 22,122 ratings for this app with an average score of 4.5 stars out of five.

Minecraft has been a wonderful and ever-expanding game since its inception. With additions like this it just continues to get better and now I can play it wherever I am.