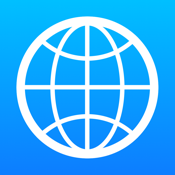 iTranslate ~ free translator by Sonico GmbH gives you award winning translation when and where you need it. It's one of the more highly touted translating apps.

There's no need to let language be a barrier when instead you could have this handy translator app with you at all times. This app lets you translate between more than 60 languages, delivering accurate translations at lightning speeds.

What's especially great is the fact you can use it as a text-to-speech translator. This feature is powered by iSpeech. Go ahead and choose a dialect, the speaking rate, and whether it's male or female.

If you're a fast typist, that's no problem here, as the app was designed for fast text input. In fact, as you're typing, suggestions will be popping up.

Once you get a translation you can share by Twitter, Facebook, SMS, or email. You may also decide to copy the translation to then paste in any other app. If you want your translation to be available in offline mode, be sure to save it.

iTranslate ~ free translator was updated on Feb. 25, 2013 and currently has 847 customer ratings with an average rating of four and a half out of five stars.

I really liked how quickly I was given translations and the fact that suggestions popped up while I was typing. I could see this being a very helpful tool while traveling so that language doesn't need to affect your journeys. It's the best iPhone translation app that I've used in quite some time.