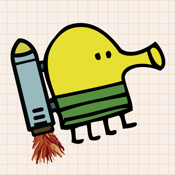 Doodle Jump by Lima Sky is a fun game app for your iOS device.

This game is totally addictive and will soon have you playing probably more than you feel is right. If you’re okay with that, then go ahead and download it.

Your goal is to guide Doodle the Doodler on his way up the page of graph paper.

Doodle will keep jumping; all you have to do is tilt your iPhone, iPod touch, or iPad to the left or right to get him to change direction. This “endless runner” – I mean, endless jumper – game has you going up and up, with occasional bad guys to shoot. The platforms onto which you will jump will change, too: some will be moving, some crumble away, some will disappear, and some will give you jet packs and other abilities.

The game offers rockets, jet packs, springs, and propeller hats. You get three secret Easter eggs, 11 worlds, and the ability to compete against friends.

You get to jump on top of bad guys like in Super Mario Bros to kill them! What could be better?

Doodle Jump was updated to Version 3.4.1 on March 15, 2013. The update made bug fixes. The current version has 524 customer ratings with an average of 4.5 out of five stars. Feedback comments are positive.

This is an awesome game that will keep many players occupied. Play for a minute, play for an hour; it’s all good.
For: iPhone, iPod touch, iPad with iOS 3.1 or later