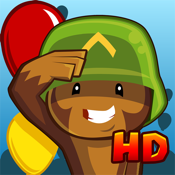 Bloons TD 5 HD by Ninja Kiwi is an awesome tower defense game for your iPad.

If you’ve played Bloons TD 5 on your iPhone or iPod touch, you’ll know what this is all about. If not…well, you’re in for a treat.

This is not your typical tower defense (TD) game. Instead of defending your tower with trained human soldiers, magicians, and other magical creatures, you’ll be defending yours with monkeys. And your enemies aren’t mythical creatures, guerillas, or otherwise bad enemy guys; they’re balloons.

You read that right. You’re defending against balloons.

You’ll have to build your towers, hire Special Agents, perform upgrades, and pop balloons using weapons and specialty monkeys. This game will give hours and hours of fun to new and old players.

The developers promise tons of cool updates that will bring more challenges, so stay tuned!

Bloons TD5 HD was updated to Version 1.3 on March 22, 2013. The update added towers, made bug fixes, and added the ability to unlock Fast Track. The current version has 490 customer ratings with an average of 4.5 out of five stars. Feedback comments are positive.

I absolutely adored Bloons TD 5 on my iPhone and the HD version is even better. It’s built especially for the iPad’s large screen and the graphics are fabulous. The gameplay is great, the sound effects are fun, and the storyline is fantastic. Check it out.