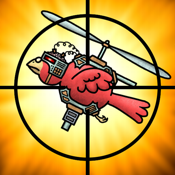 
War Pigeons Unbounded by Adam Vlcek is a great new fun game for your iOS device.

An entire military lab full of crazy pigeons has escaped after they evolved and mutated into something other than ordinary birds: they’re war pigeons! Your original job was to guard the gates to the underground facility. You were to stop people from getting in, and kill anything that tries to escape without authorization. That was great, until these crazy birds escaped!

Your goal is to kill them all with the biggest guns you have. Of course, you could just let them take over the world, but you’re not into that, are you?

Features of the app include the ability to fight off various breeds of mutated birds (great if you hate birds in general); a wide variety of weapon choices; numerous perils to keep you on your toes; power-ups, ammo, and medication to collect; numerous challenges; and scalable difficulties.

Gameplay is easy: tap the guy, drag until you touch the bird, then let go. You’ll have to dodge the falling threats using the virtual joystick. You can also use the accelerometer or direction buttons. You can tune your controls using the settings.

Tilt the device to make your guy move around to look for escapees and to avoid falling eggs and birds.

War Pigeons Unbounded was released in mid-March 2013. The game is available in English only and is suitable for kids 12 and up. Parents should use discretion. The app has not received enough ratings for iTunes to display an average.

This was a really fun and easy-to-play game. Controls are fairly intuitive. I can see playing this game when I have a few minutes to burn. Check it out!