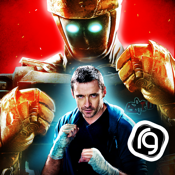 Real Steel  by Jump Games Pvt.Ltd. lets you get into the action of robot battling.

Real Steel is a hit Dreamworks movie based on a story about giant boxing robots. Step into the ring with some of the meanest metal combatants you have ever imagined and duke it out for the championship title belt.

There are several awesome modes included in this app that pit your machine against some serious competitors. Start off with the Tournament Mode where you compete against a tier of foes as you battle for supremacy. Finish this mode and earn the exclusive Gold Atom character.

Other modes include Survival where you must battle as many opponents as you can before you finally fail to win. How many can you defeat with only a single life? Real Steel features all of the robots from the movie including Atom, Zeus, Midas, Noisy Boy, and more. This is your chance to live out your own version of the action with Real Steel.

Real Steel was last updated to Version 1.6.1 on February 15, 2013 and included the new robot Danger Zone and the special addition Gold Atom. There have been 1425 ratings for this app with an average score of 4.5 out of five stars.

I loved the movie and now I love the app. For only $0.99 you have to try this game out, it is outstanding.