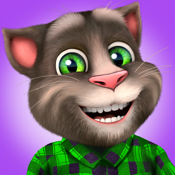 Talking Tom Cat 2 by Out Fit 7 Ltd. brings that lovable cat back to your mobile device in a whole new and fun way.

Tom's back! It's time for a new adventure with this lovable cat. You'll be in a whole new environment as Tom is moving up in the world. Instead of living in the alley he's now in his very own super sweet apartment. However, moving up in the world also comes with some downfalls such as his new neighbor Ben. It seems as though Ben has taken a liking to teasing poor Tom all the time.

him accessories, uniforms, and more. You'll need to either earn or buy gold coins to buy accessories for him. If you launch the game daily, you'll get 25 coins each day. As well for each push notification you get, you will receive 200 gold coins.

Tom will repeat everything you say to him but in his own cute voice. You can pet Tom's head or belly if you want to hear him purr, slap his face right and left, poke him, pull his tail, and more. You can also control some of Ben's actions.

Talking Tom Cat 2 was updated on Nov. 26, 2012 and currently has 992 customer ratings with an average rating of five out of five stars.

If you were a fan of the original Talking Tom Cat game then this is a must-have. Even if you’re not familiar with Talking Tom this app is just pure, simple, fun entertainment that will have you in fits of giggles.

For: iPhone, iPod touch, and iPad. Requires iOS 4.3 or later