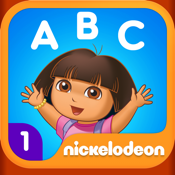 Dora ABCs Vol 1: Letters & Letter Sounds by Nickelodeon lets your child work with Dora the Explorer to learn the ABCs.

Learning your ABCs is a critical part of learning to read and Dora is here to make it exciting and fun. Follow along with Dora and friends as you play games while you learn. This app is an energizing and refreshing approach to the traditional learning process.

There are several different games that your child can play including a trace the letter game where Dora will say each letter as you trace it. There is also the letter and picture match game where you have to match the letter to a picture of something that starts with the same letter.

The games are very easy to follow along with and any child should be able to quickly start playing. The images are true to the Dora style and the user interface is very user friendly. All of the character's voices are actually those of Dora and friends which adds to the authenticity and enjoyment of the app for your child.

included some performance enhancements. There have been 22 ratings for this app with an average score of 3.5 out of five stars.

Dora is a great character for children to interact with and she makes this app enjoyable for children. It’s important to know your ABCs and this app does a good job of helping with the learning process.