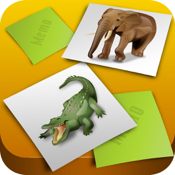 Memory * by Clement Marty is a game where you’ll test your memory on your iOS device.

This game can be played by anyone in the family, from the four year old child to the 90 year old grandmother.

The images are shuffled and placed face down. Your job is to make matching pairs of the letters, animals, food, or numbers. When you form a pair, they disappear and you keep going until all are gone. The faster you guess, the higher your score.

Compete against yourself or others on Game Center.

When you first launch the app, you can play Level 1, 2, or 3 of the Easy level. I’m not sure of the point of some of these levels, since there are only two cards in Level 1. Level 2 has four, Level 3 has six. These are all animals to match.

Medium level starts on Level 6 and is also animals. When you complete each level, you get ratings for Performance, Time Bonus, Combo Points, and Total Score.

There are in-app purchases but you don’t have to buy anything to enjoy the game.


Memory * was updated to Version 1.5.3 on May 16, 2013. The update fixed a bug. The app is available in English, Spanish, French, and German. It has a total of 1117 customer ratings with an average of four out of five stars.

I’m not a huge fan of these types of games but this one is actually pretty good. The fact that it’s timed and you get different scores depending on your time makes it a bit of a challenge if that’s what you’re looking for.