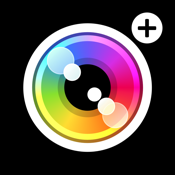 What would happen if you took the standard iPhone camera, which already takes great pictures, and super sized it with digital effects, added features and instant share capabilities? Well the folks at TapTapTap have answered that question with Camera+, a photo editing app for iPhone that makes taking pictures the way you want them easy and fun. Snap away using the app’s familiar camera interface which features a grid and zoom bar on the right hand side for convenience.

After you've taken a picture, it can then be transformed with light, color, position and border effects to create that perfect sepia old-timey look or mimic a Polaroid picture (just don’t shake your iPhone because you might drop it). Camera functions include position stabilizer (no more blur!), timer (5, 15 or 30 seconds) and burst which takes pictures in quick succession for as long as you hold down the camera button.

Sharing your awesome pictures is easy with Facebook, Twitter and Flickr integration, and the locator feature shows your where your picture was taken for future reference. If you want to apply the effects of Camera+ to your already existing photos, you can easily upload them into your Camera+ “lightbox” and edit from there. The only thing that the app cannot do which Apple's native Photo app can is take video. So for all those concert vids and short movies you’re still going to have to use Apple’s version.

Camera+ is easily one of the best photo editing apps for iPhone, which makes taking and sharing pictures easy and fun, and is definitely superior to the iPhone’s camera app in terms of features and functionality. AppPicker Rating: 5 / 5 Stars Pick It Up in the App Store: Camera+ Other apps by Tap Tap Tap