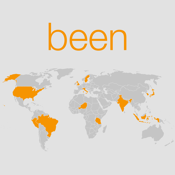 Been app review: a beautifully designed app to track where in the world you have been-2020

Been by Martin Johannesson has been designed to mark and track all the countries in the world you have visited. The app is created in a way so you can see all your countries in a list or on a map, and you even get a breakdown on what percentage of the world you have visited. Sharing features are the cherry on top of the app. Cloud syncing makes it possible for you to access your list from any device you are currently on.

Been travel app runs on devices with iOS 8.0 or later with support of up to iOS 14.0 and it is compatible with iPhone, iPad, and iPod touch. It will need less than 6 MB of free memory space on your mobile device to download and install. Supported languages of user interface of travel history app are English, Catalan, Danish, Finnish, French, German, Italian, Japanese, Korean, Norwegian Bokmål, Russian, Simplified Chinese, Spanish, and Swedish.

Been is a very simplistic app, both in visuals and in what it does. It simply asks you to check all the countries where you’ve been and while you do this it simply shows you on the map where you’ve been. This is all done in a very stylish and slick orange and white color scheme. Weirdly enough, the app doesn’t actually tell you how many of the countries in the world you have visited, but it does give you a percentage of the countries you have been to, globally and per continent. A zoom function on the map is also missing, which especially in a region where many small countries exist, is quite a nuisance. 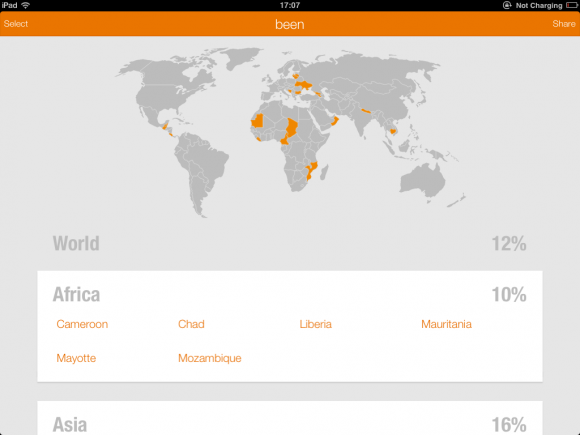 Some minor mistakes and missing features

Funnily enough, the developer has made some glaring mistakes about countries. For example, Scotland and Wales are not recognized as countries by the app, and Hong Kong is part of China. When clicking on a specific country, you’ll simply be sent to the Wikipedia page for that country, while I think it would be great if the app itself would supply some more information about each country. Simple visual aids like flags and currency would also be a welcome addition.

Been track your travels app was updated to version 2.2.3 in on Feb 17, 2018. The current version of places that you have been app has a total of more than two hundreds twenty customer ratings with an average rating of three point seven out of five stars on apple applications store web site. 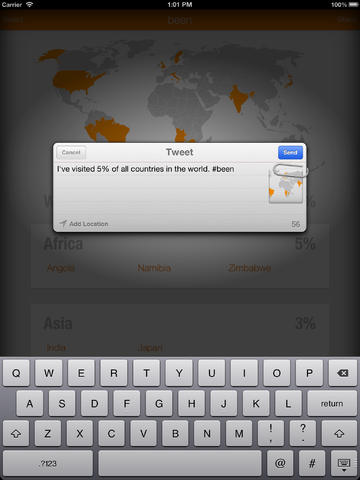 This app is visually stunning, really well-designed and very fun to play around with. Regrettably, some glaring mistakes and obviously missing features make this map lose out on good will. As the app is really small (probably the smallest app I’ve ever reviewed) it’s almost a no-brainer to recommend this app.

Since the app is free and there are no ads implemented at all, you should all download and try this app out. How many countries have you visited? You won’t know, but you will know a percentage! For any graphic designers, this is how an app should look: clean, bright, and extremely useable.