Tap & Say app review: a phrase book that does the hard work for you 2021

Tap & Say - Speak Phrase Book by Codegent is the ideal phrase app for the globetrotting adventurer. The Tap and Say app for iPhone allows you to tap on a sentence and it will then speak it out load, while also showing the English (in my case) and written version in the language you’re making the app use.

You can easily change the main language by tapping on the top banner of the main page. There are 10 different languages available in the app ranging from Japanese to Italian, from German to Indonesian, and from Spanish to Vietnamese.

Each language has around 600 phrases to make use of, but of course, this doesn’t come for free. Keep reading out Tap and Say app review to see if this is the best app for phrases available.

Tap & Say is the ideal communicator buddy for you when you’re visiting a country where you don't speak the language, especially countries where the writing doesn’t use the Roman alphabet. For example, you walk into a store to buy some batteries, which are behind the counter.

This app will allow you to make  the shop owner listen and read to the word battery and voila! You’ve just gotten yourself batteries! It’s also easy for initial conversations.

All of the basics (greetings, essentials and numbers & colors) are included in the free version of the app. All of the recordings are created using a native speaker, making it understandable for all!

You can also tag a sentence as a favorite, which can come in quite handy so you do not have to search for the same sentence over and over again. 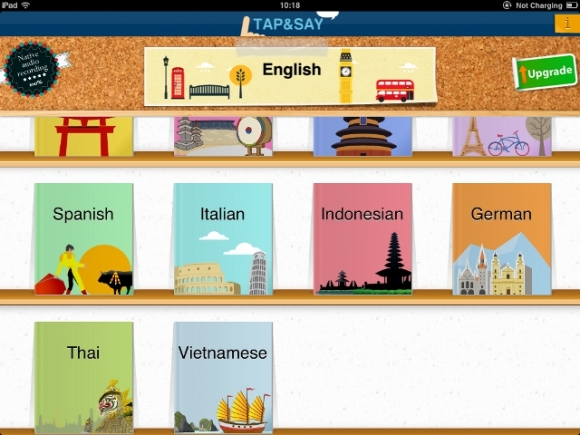 Of course, if you want to get a full set of sentences, you need to pay for it. This is very cleverly done, as you can either buy a single language pack for $2.99 or you can buy all the language packs (which is 10 right now, but more might come out soon according to the developer) for only $19.99.

This will add ten different categories to the language of your choosing, like dating, feeling sick, eating and drinking, and family. 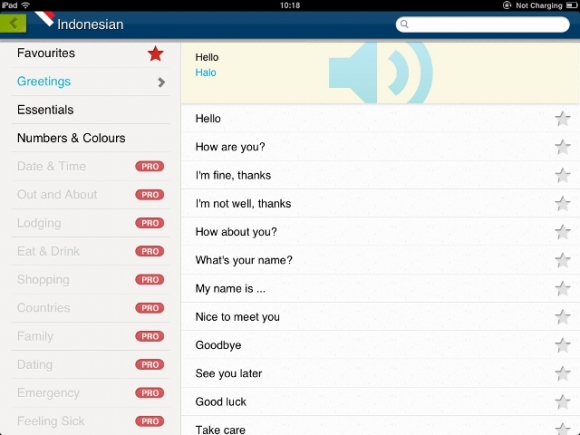 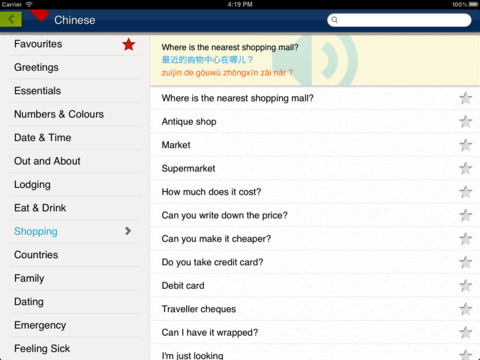 Tap & Say has earned itself a spot in my travel directory. It’s really handy to have all those languages handy as I’m quite the traveler myself. If I find myself really struggling, I might actually pay for some of the upgrades, as it will really help when you’re visiting a country where they have a different alphabet.

It will also help to strike a conversation, as you can easily change the language the app is in too! The app is available for both iPad and iPhone, and is only 36 MB in size. I recommend this app for anyone traveling the world.