How much do you enjoy reading comics?

Well now you can enjoy them on the go with the Manga Storm app for your iPod touch, iPad, and iPhone. This iPhone manga app makes it possible to read DRM-free comic books in a variety of file formats.

The way this manga app works is that you can read them straight from the cloud or if you want to be able to access them offline, just download them straight to your device.

Manga reader app supports comics in cbr/cbz/cb7/cbt/rar/zip/7z/tar/pdf files. Create shortcuts to your cloud storages (called "comic servers") and access comics on them directly through the Mangareader app. Now you can travel around with your entire comic book library.

Keep reading our Manga Storm CBR app review to see how this comic app stacks up with the best manga apps for iPhone and iPad.

The Manga Storm CBR app is filled with reasons to download it, first off it supports a variety of files. These files are PDF, ZIP, RAR, CBZ, and CBR. Now as far as the servers go, this one is capable of supporting Box, OneDrive, Google Drive, Dropbox, WebDAV, and FTP.

Keep in mind if you plan on using Box as your server you'll need iOS 7 or later. As mentioned you can access your books and read them through the app or you can download them to your device, and then use the app as an offline reading tool.

This one is free to download however there is an in-app purchase of $2.99 which gives you acces to all the pro features. You will need iOS 6.1 or later to use the app, and as of right now it has a five out of five star rating from customers.

Users love all the tools and features, how handy it is, and how easy it is to use. In its most recent update there were a number of changes, improvements, and fixes made. Users can now look forward to an even better experience than before. 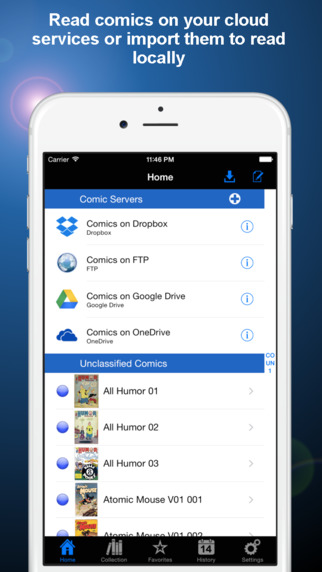 If you plan on just using the free version of Manga Storm CBR then you'll be able to connect with your server through one tap and then read your comic book. If you want to import the book you can do so through iTunes File Sharing, or through the import function.

All comics can be organized by creating folders for them, you can choose your reading direction, and you have the ability to customize the import options.

For those considering the pro version of the app there are added features such as a progress reading to let you know how far you have read in a saved book, there are shortcuts you can set up to mark specified comics as a favorite, you can give a comic book a particular reading style, and you can read everything in a group all at once.

Tha Manga app supports "Left to Right", "Right to Left" or "Top to Bottom" reading direction. The mangareader app can now detect some comic files that contain pages with non-standard naming and view their pages in correct order. 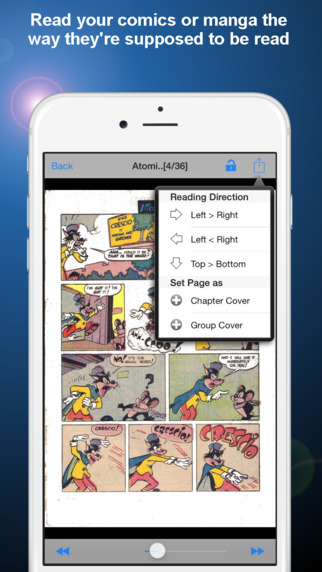 The Manga Storm CBR app for your iPod touch, iPad, and iPhone is aiming to change the way you read your comic books and provide users with tools they will quickly become hooked on.